05 May Newt Ponds in Lawrence’s Gorse

Posted at 11:18h in Wildlife and Conservation by Lydia Handy

At the beginning of April the water courses on the farm were surveyed by Holly Williams and Pascale Nicolet from the Newt Conservation Partnership with a view to creating ponds for the endangered Greater Crested Newt. There is evidence of these newts in the area so the conservation charity is keen to establish a network of suitable habitats to encourage the newts to migrate further afield.

All the water on the farm are springs fed from aquifers deep underground.  The majority of the farm is limestone brash which is very free draining with only odd pockets of clay and fullers earth which is where the springs surface.  These springs travel above ground over the clay areas and then disappear further downhill between the limestone cracks.  The water quality of the springs was analysed and found to be high in nitrates.  This excess nitrogen is caused by decades over use of nitrogen fertilizers by farmers in the catchment area of the aquifers.  The problem is that this nitrogen deep underground cannot be ‘used up’ until the water surfaces and the nitrogen absorbed by plants.  It will take many, many years for the levels of nitrogen in the aquifers to reduce and this is only on condition that farmers restrict fertilizer use.  The nitrogen in ponds and lakes causes the proliferation of algae and pond weed so damaging to all other wildlife. Due to this problem, it was decided to build ponds that would be fed only from rainwater run-off.

Lawrence’s Gorse, the ten acre wood where we have recently felled and replanted four acres due to ash dieback provided the perfect location. This site has areas of very heavy deep clay perfect for constructing ponds using only the natural clay to make them watertight. The Newt Conservation Partnership engaged contractors to scoop out 3 large ponds in glades adjoining the new tree planting areas. 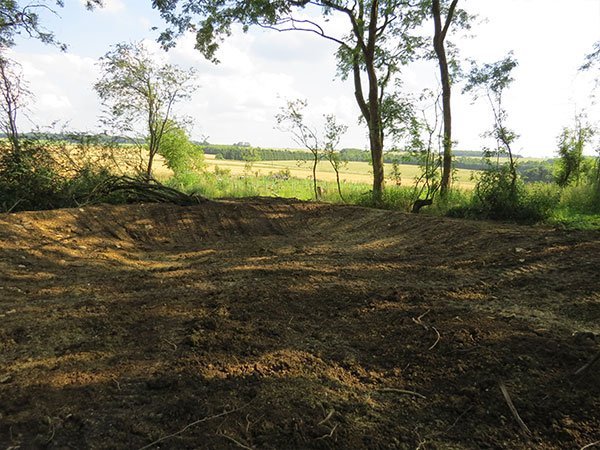 The ponds were constructed of varying levels and shelves providing a variety of water depths to suit different plant and animal species. All three ponds were positioned on slopes to collect maximum rainwater. We now have to wait for the rains to come and in time fill the ponds! The surrounding areas will be left to naturally regenerate with indigenous flora and fauna providing as natural a habitat as possible. The ponds will be monitored closely with surveys carried out every six months. Water is such an important habitat for wildlife and we are so looking forward to seeing the benefits, not just for the Greater Crested Newt, but all other creatures and plants that like it damp! 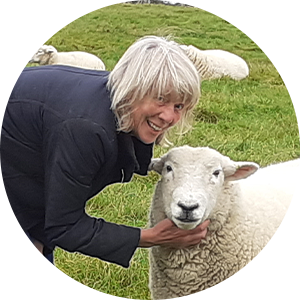 Tucking into the bundles of tree hay that we made

Providing a scratching lost is so important for an